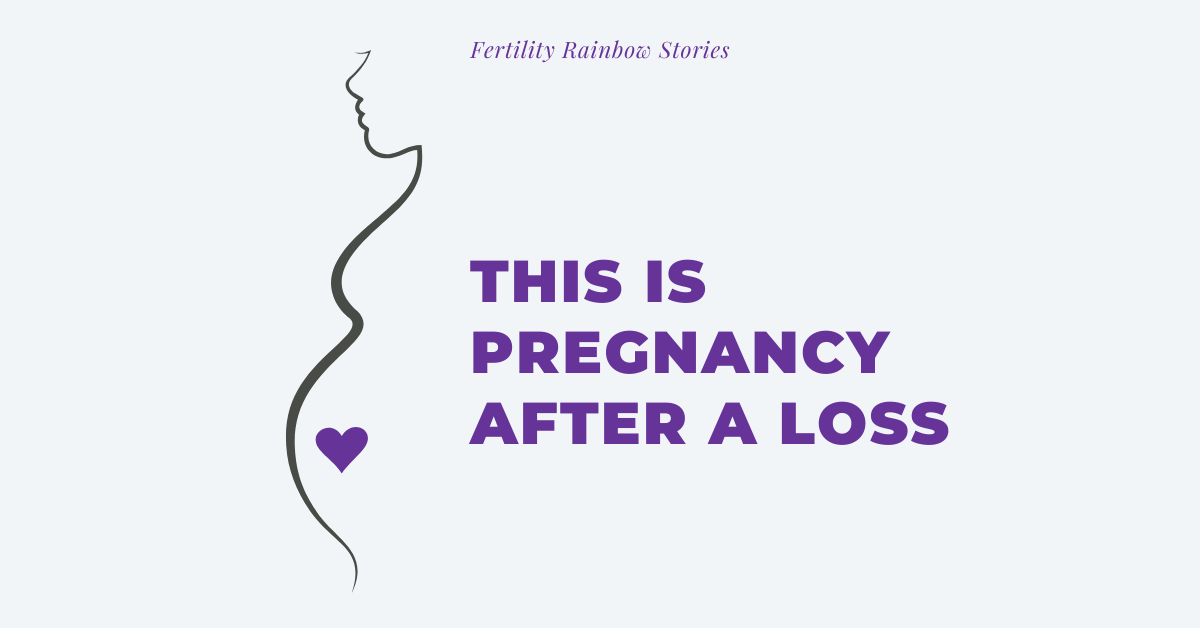 This is Pregnancy After A Loss

I have always been the type to do everything in the expected order.  Go to college, get a degree, meet a guy and get married, and have a bunch of kids.  That’s the ideal life, right?  I just never realized that my dream of becoming a mom one day would be such a hard and unexpected one…

I started trying for a baby back in 2015 shortly after I got married.  I just assumed it would happen quickly and without any real effort, but after a year of trying the emotional toil had caused a strain on our marriage which led to him having an affair with someone else. According to him, I was unable to provide children for him and be a “real woman”.

Flash forward the next year, I met an amazing man, and we dated for over two years before we got married and decided to start trying for a family.  Four months in, we got our very first positive and we’re so excited at becoming parents. I couldn’t wait and immediately started telling my close friends and parents.

Sadly, it was short-lived, and a few days later we miscarried.

Confused and sad, I called my doctor, and she explained after labs were done it looked to be a chemical pregnancy and that “these things happen, just keep trying.”  So we did.

We kept going and my periods continue to belong, irregular, and painful. My husband and I were a bit frustrated and wanted some more answers, but my nurse practitioner blew off my concerns about this and said it was due to my weight. Her only advice was to try to lose some weight and I would finally get pregnant.  When I asked about testing for PCOS, she laughed me off saying “I needed to stay off Google.” Months went by, and I had to go back to the doctor for severe abdominal pain, finally, she agreed to run some more tests and found a large cyst had ruptured and ran labs which led to me finally being diagnosed with PCOS.  She said it may be harder for us to get pregnant, but she wouldn’t do any further testing until it had been a year of trying. “Of course, you’ll be pregnant by then so don’t worry,”  she said. I had explained on more than one occasion I had previous trouble with my ex-husband getting pregnant, she said different guy, different time.  Just keep going.

We got our referral for a fertility specialist at our year mark in August 2020.  He was taken aback that I had technically been trying for two years at this point and factoring in my age, he gave us the shocking news that we only had a 2% chance of getting pregnant naturally.  We were completely devastated and angry that we had wasted so much of our time at our previous clinic.  He was optimistic that there was still a chance and we would hit the ground running on our treatments. First, I had done a Parryscope (similar to HSG) to check for any blockage or scar tissue that could be causing the issue.  During the procedure, he found scar tissue blocking off most of my cervix.  This was from a LEEP procedure I had done roughly 8-9 years ago when I had cervical dysplasia that needed to be removed.  He said that this had definitely been a factor on us not being successful.  After unblocking the scar tissue, my tubes and uterus seem to be open and clear, a very hopeful sign for us.  One issue down and now to tackle my PCOS diagnosis.

We then proceeded to do three medicated IUIs with trigger shots back to back over the next three months. This was all during the height of COVID and an extremely stressful time for me as I worked as a Respiratory Therapist on the front lines daily with these extremely sick patients. All the while, dealing with my own battle of infertility and trying to prevent catching the virus myself.

We also found out while doing IUIs, that my husband has a low sperm count. My husband is a few years younger than me, so this was a curveball we weren’t expecting.   The first semen analysis was done for the first IUI and the count was low at 26 million. We had high hopes, but the first one failed. The second improved to 28 million and we became pregnant a second time shortly after Christmas, only to once again miscarried.  The third IUI had so many good luck signs for us.  We called it our  “lucky #3” we had three beautiful follicles, my 33rd birthday was coming up,  and our doctor joked about triplets and the final count was in the normal range of 60 million, and we just knew this time it was going to work for us.  Once again, I saw those beautiful two lines for a few days and started to miscarry on the day of my birthday.  I was beyond broken at this point and hit a low I hadn’t had to deal with in years.  I fell into a deep depression, locking myself away and crying for days from everyone.  I told my husband that was the last straw I couldn’t lose another baby and I needed a break. Then my fertility doctor said we were down to 1% chance and IVF prolly would be our only shot.

We agreed to take a break for our sanity and to start saving for IVF and look further into the most affordable route we could. February came around and I had started “It starts with the egg” vitamin protocol to get my body ready for the months ahead and enjoyed feeling normal again.  No tracking, no ovulation tests, it was honestly such a breath of fresh air.  So you could imagine my shock when I took a test out of habit and saw a faint line.  In disbelief, I waited and took several over the next two days and was shocked with the lines getting darker.  I went in for blood draws and my doctor told me to try not to get too hopeful, but day 1 and day 4 blood draws came back great and doubled and my husband and I were overwhelmed by the miracle.  Our doctor was overjoyed that we achieved the impossible with this little one and we are forever grateful to them.

Even though we have finally achieved a pregnancy that has surpassed 7 weeks our hearts stay guarded as we know that miracles happen, but they can definitely be taken away.

Pregnancy after a loss hasn’t been easy, and it took till the second trimester to feel comfortable taking bump pictures and planning for the future.

We currently hit 24 weeks which is viability and my heart feels a weight has lifted.  We still have challenges ahead of us with our sweet baby boy, he was diagnosed with Jacobs Syndrome through NIPT testing at 12 weeks and that was overwhelming after everything we have been through, but I wouldn’t trade him for anything in the world and hope to continue to learn and grow from the special miracle that he has been to us.  Infertility has brought me so much heartache, but it also has opened my eyes to a new understanding of myself and the strength I have to carry on and has brought so many amazing people into my life with their stories and support.